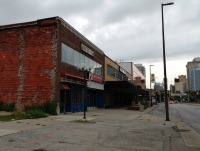 When a $6.5 million streetscaping project gets underway Aug. 28 on Ouellette Ave. between Wyandotte and Elliott, a major aspect of the transformation will be creating a wide off-street area, delineated by multicolored pavers and street furniture – that can be used for a variety of purposes.

The city is doing this to take advantage of an unusually “wide pedestrian right of way,” says city planner Adam Coates.

These are the sidewalks on both the east and west sides of Ouellette south of Wyandotte which have long been used by local bars – such as the Bull N’ Barrel – or not used at all, especially on the west side, often vacant, empty and litter-strewn.

Up to now private business like bars have, under license, been able to use these spaces.

And they still will after the project is complete.

But the difference is that the spaces will be transformed into aesthetically pleasing areas – with street furniture, decorative pavers, trees and planters – and set off from a visible pedestrian right-of way.

As Coates put it, “The width of this pedestrian area allowed us to create a flexible space.

“It’s almost like a park space where there would be street furniture, and there would be kind of passive things for people to come to, you could sit and have lunch,” he says.

When the space is not licenced to a private business for a patio it can used as be a public area much like a park or, in Coates example, like Maiden Lane, a narrow thoroughfare that connects Ouellette and Pelissier a couple of blocks north.

The street furniture would even be the same, such as tables with chess boards on them.

What happens if a business wants to use the space and install its own tables?

Coates says the street furniture will be removed because it can be unbolted.

Another use would be combining the public amenities with private business use.

Coates says that a bar could set up a table around a city planted tree.

“You could potentially build a table around it, put a table up close to it, so the trees would be part of that space,” he says.

“That’s nice, when you want to go out and eat somewhere, and you have a little bit of tree canopy that’s there, a little bit of vegetation and kind of complete that ambiance.”