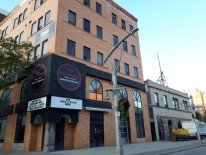 The properties were sold under power of sale by Windsor Family Credit Union, as reported in Windsor Business newsmagazine.

The same business group is also redeveloping the former Fish Market and Loop nightclub building across the street.

Renovations continue with scaffolding extending around the site.

Besides the ground floor retail, both buildings have upper floor apartments with the Beer Market (which used to be Cadillac Jacks) topped by several stories.

“There’s apartments there but these apartments are pretty rundown,” Maggio said.

“Really, I have to vacate everybody that’s in those apartments.

“That’s because they’re so rundown that to my standards they’re not livable.”

There are more than 20 tenants, he said.

Maggio said it’s still uncertain what the buildings will be converted into.

“I’m having a dual purpose on that, I have some people that are interested in office and we’ll see what transpires.”

The same applies to the old Fish Market.

“My personal feeling is that once you have some office workers who take a look at that they’ll fall in love.”

Maggio, a successful Windsor developer with mainly suburban commercial and industrial buildings (though he once owned properties like 1880 Assumption and 475 Devonshire in Olde Walkerville) and company purchased the buildings without doing any market research.

“I have not tested any market yet,” he said.

“I just pray a lot” which is “what I’ve done my whole life.”
There is a lot of work to be done.

Maggio was not impressed by the buildings’ structural shape and his group will have to spend hundreds of thousands of dollars – he didn’t give an exact amount – to restore the buildings into quality commercial and residential livability.

“Whoever the developers were, whoever owned these buildings, it was a joke, it was a complete joke,” he said.

Unlike other developers who may have taken a stab at trying their hands at downtown renewal, this group has development know how and experience and an uncanny ability to draw tenants to newly renovated buildings.

But said, Maggio, “We’re taking a risk on downtown.”

“I don’t think anybody would have taken the risk that I’m taking here because literally we’re spending that much money.”