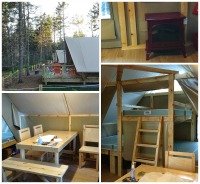 “People love this product,” he said.

The unique structure offers residents a platform – winterized versions, which will be available at the Point, have plywood walls and insulation – including a balcony, and inside three beds that can accommodate up to six people.

“It’s a unique concept for visitors to enjoy camping with the comfort of a bed and a campsite already set up and ready to go,” Parks Canada says on its website.

Biome was created by Rousseau, a former civil servant who decided there was more to life than working a strict nine-to-five job.

The company’s first product was the so-called Yurt, an igloo-like structure with a dome roof, also incorporating a fireproof fabric.

The oTENTik tent-like roof’s fabric comes from France and is double layered with insulation for year-round habitation, providing sufficient heat in winter and coolness in summer.

Stoves or heaters can also be installed inside.

Nevertheless, there is an opening to the great outdoors, but covered with a screen mesh to keep insects out.

Rousseau came up with the idea because he was doing some snowboarding on Quebec’s remote Gaspe peninsular, and could not find smaller, cheaper accommodation in natural areas.

Rousseau says the oTENTik has been a hit for people who want a camping experience but don’t have, or want to bring, their own camping equipment.

“And for tourists from outside of the country it’s very interesting because they have the possibility to stay in the park.”

The price for overnight accommodations at Point Pelee? $120.

Rousseau says he gets many inquiries from people wanting to buy the product for themselves but he has strictly limited sales, which come in a kit, to a government organization like Parks Canada.

But he says he’ll unveil in late August a new product that would be geared to the consumer market – “more of a cube ... a more modern experience.”