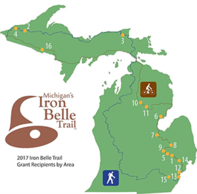 The “Trail” is actually two trails.

One is for hiking, and although starting in Detroit winds its way through the western part of the Lower Peninsula.

The other is for cycling, starting again in Detroit but taking a more easterly route up the Lower Peninsula.

The hiking route is actually longer at 1,273 miles, with cycling being 791 miles.

The Trail is a fairly recent phenomenon, with $34 million in federal, state and local money being invested in it only since 2013.

Last month the Michigan Department of Natural Resources announced $350,000 for 16 projects, from building new trail segments to feasibility and environmental impact studies for others.

“We’re hoping to have a lot of it done by the end of next year.”

State officials acknowledge there are gaps in the trail system.

But even the not-all-that-adventurous traveler should be able to find plenty of places to jump on and off the trail, by using a an interactive map at  www.michigan.gov/ironbelle.

“If you dig into the map it will show you the intersection, the parking lot, that type of thing,” the state’s trails coordinator Paul Yauk, says.

The Trail’s surfaces tend to vary from asphalt to compacted limestone.