Cricket clubs vigorous but could use more support 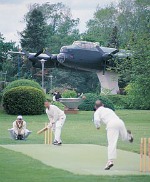 “There’s no life without cricket in India,” he says, adding it’s such a popular sport back home that it’s “more than hockey here.”

The season usually starts in May and last through the summer.

Clubs, whose various sites can be found online, play at two city parks – Optimist and Jackson.

Singh applauded a decision by the University of Windsor to build a cricket pitch because there are hundreds of students at the university who come form India.

“I think that’s a good decision because the University of Windsor every year they have 400-500 international students from India alone,” Singh says.

Singh says the sport is better developed elsewhere in the province, such as in Brampton, where even high schools field competitive play.

One of the problems locally is getting enough sponsors.

“If we can find enough sponsors or city support I’m sure that is possible,” to even get high schools to set up clubs, he says.

Singh says cricket is not a particularly difficult sport to play.

“It is basically another version of baseball but they have wickets,” he says.

“There are different rules but it is as enjoyable as baseball.”