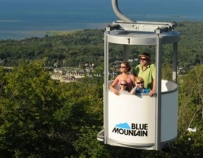 “Every spring the chairlift gets converted to the gondolas,” Blue Mountain’s Tara Lovell says.

“So, once we close out for ski season it takes a couple of weeks just turning everything over, the chairs are removed, and the gondola cars are installed along with carts that hold downhill mountain bikes.”

That’s right, the lift has individual carts to haul your bike up the mountain, should you be as adventuresome to ride along the mountain top or descend to the base.

Lovell says it made sense to convert the six-seat fast chairlifts for the summer season.

“We already have the cable and the bullwheel, everything in place to be able to operate it, and then it’s just a matter of flipping it over so that it can be used year-round,” she says.

The mountain rises 700 ft. and the gondola rides - which can accommodate as many as eight people (families are grouped together) – takes seven minutes to go up and seven minutes to descend.

But you can get off at the top, bike or hike the trails, including hiking up or down them.

That’s a non-too strenuous hike, at least for the downward version, since even Lovell’s four-year-old has done it, albeit, she says, with some incentive like food.

Conversely, people can hike up the slope and take the gondola down, and pay half the round trip adult $16 ticket price.

The mountain itself is an outdoor person’s paradise.

The gondola experience is even accessible for people with disabilities, since there is seating with umbrellas at the mountain’s top, and paved trails for people in wheelchairs.

On the summit there is also a food truck, serving gourmet grilled cheese sandwiches, and, if you wish, Segway tours.

Lovell says the gondola is popular because it’s one of a kind.

“It’s a nice way to be able to take in the vista, to look over Georgian Bay and to access the top of the mountain,” she says.

The gondola is a focal point of the bustling residential and commercial Blue Mountain Village with its numerous restaurants, but the vistas are much greater than that.

“If you are visiting this area and you really want to be able to take the area in – which is all of southern Georgian Bay as well as the town of the Blue Mountains and Collingwood as well then that’s really your best opportunity to capture that.”