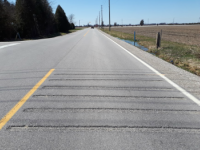 In one place the strips were installed for the first time on Alma St. leading up to Howard Ave. on both the east and west sides.

This followed a traffic fatality there last September.

Yet, only one month later, on December 11, a delegation of people living near the strips complained to town council that the new or reinstalled strips were annoying because of the sound vehicles make when they roll over them.

Michelle Poberezny, who live near County Rd. 10 (Middle Side Road) and Concession 8 North, according to the River Town Times, said the strips “significantly impacted our quality of life” – including the rattling of dishes - and the sound “literally gets on your last nerve.”

Town councillor Diane Pouget said filling in (eliminating) the rumble strips made sense, especially since the cost, according to a town report, would be only $13,565.

She called the remediation a “win-win” because the town will install alternative measures instead to enhance safety.

At the Alma-Howard intersection, there are four sets of six strips on either side of the intersection.

In the report to the town’s April 9 council meeting, council was informed that the strips were installed without paying proper heed to nearby residents.

“Most policies and guidelines suggest that rumble strips should be avoided in residential areas due to the noise created by the rumble strips,” it said.

“Some guidelines provided setback distances between 200-500 metres from a residential area or property.  If the minimum distance of 200 metres were applied to the recently installed rumble strips, the majority of the rumble strips would require removal.”
Meanwhile the report said the Howard-Alma intersection – the site of last fall’s fatality - was the “only one without an oversize stop sign.”

Council’s decision to eliminate the strips came a few days after a horrific traffic crash in rural Saskatchewan, where a transport truck t-boned a bus carrying members of a junior hockey team, killing 15.

There was national discussion in the aftermath of the accident that rumble strips may have been a way to alert motorists of the upcoming stop signs on the intersecting rural route that crossed the main highway on which the bus was travelling.

There was also speculation that accidents are more likely to occur on long, flat monotonous highways, like the county roads in flat Essex County.

Meanwhile, the town’s report noted that the transverse strips provide a “tactile and audible warning” in areas where motorists travel a “monotonous roadway environment at high running speeds.”

Instead of the Amherstburg rural route strips, the new alternative road warnings at the seven intersections will be oversized stop signs, flashing beacons, along with Stop Ahead pavement markings and Stop Ahead roadside signs.

But, warned the council report, “It should be noted that flashing beacons and larger signage may not provide warning of an upcoming stop when it comes to distracted driving as the driver is not looking at the road in those cases.”