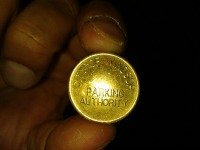 They’re also available for purchase by the general public.

The tokens sell for 25 cents – “same as a quarter” – says supervisor of parking enforcement Bill Kralovensky, and a roll is $10.

Each token provides 12 minutes time, same as a quarter.

Even though the tokens are priced the same as a quarter motorists might find them more convenient because sometimes they might not have the exact change.

But Kralovensky said few people know about them.

Meanwhile BIAs purchase the tokens at half that cost, underwritten by the city,  and then give them to merchants to help out their customers by plugging meters for them.

Coordinator Caroline Postma said the board paid for them and gave out tokens based on merchants’ opening hours coordinating with parking meter hours.

Postma said she has only received positive feedback and “probably a handful of businesses who said, ‘We love this can we have more.’ ”

She said merchants will give the tokens to customers who might not have enough change or who are concerned about the meters running down.

“You have to be outgoing with your customers too if you have tokens,” she said.

“Because it’s your job to say, ‘Did you put money in the meter, I have some tokens here for you for being my customer.’ ”

Postma said the tokens are a partial answer to perennial parking meter complaints.

She said eliminating meters altogether is next to impossible.

“So we decided that instead of removing the meters and fighting a battle that we were never going to win, that what we would do is buy a whole bunch of tokens and give them out.”

But even for some BIAs the tokens are a bit under the radar.

“I don’t even know anything about that, and how it works,” said Via Italia Erie St. BIA coordinator Tony Conciatori.

“I’m not familiar with the whole program.”

Joan Charette, who coordinates BIAs in Walkerville and on Ottawa St., said the program is a “fairly new thing for me to find out about” and said Walkerville likely will introduce them after major streetscaping work ends.

“We actually have not talked about that yet,” she said.

“I’m not sure how we’re going to work it but we will definitely be taking advantage of the program.”

As for the Ottawa Street BIA, “I don’t think they ever have (given them out), I think it’s something I need to bring to their attention,” she said.