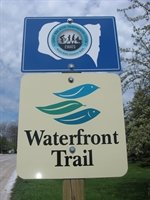 But participants can choose what legs of the ride they want to take part in.

They can register, for a fee, at the GWTA’s website www.waterfronttrail.org.

Scott has done a similar ride between Niagara and the Quebec border.

This new ride will officially inaugurate the southwestern Ontario section, linking to the eastern Ontario trail.

“Kicking this all off is the inaugural ride,” he said.

Residents from across Ontario are expected to take part.

The ride will run along a route recently marked by Waterfront Trail signs, which are consistent with the eastern Ontario signs.

They show a leaf, bird and fish on a white background.

The first segment is 60 km between Lighthouse Cove and Windsor.

The second segment runs from Windsor to Pt. Pelee.

The remaining segments stretch over the week, eventually ending in Fort Erie.

Scott stresses this is not a competition.

“This is a social ride, this is for people of all levels and abilities.”

There will be designated camp grounds and options for nearby hotels.

A van or “support vehicle” carries riders’ gear and can also transport riders if they get tired.

Scott says the route “hugs” the county’s major waterways – the lakes and river – as much as possible, and will in fact trace a major bike route being implemented by county planners.

Indeed some of the county trail signs (CWATS or County Wide Active Transportation System) are attached to the Waterfront Trail signs.

“The signage is essentially the first step,” he said.

Scott is hoping local mayors will join the tour, particularly as the ride will go through all seven municipalities.

Scott says the event should cement the idea of bike tourism locally once and for all.

He said each year the route will be improved because there will be more money spent creating bike lanes.

“This is not a passing fancy that will go away,” he said.