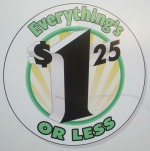 Montreal-based Dollarama, on the other hand, which has been in business much longer and now has more than 1000 outlets across Canada – and opening as many as 70 more this year – has changed its pricing strategy since 2009.

Goods used to be priced at just $1.

Now, you can find items two or three times that amount.

“It has allowed us to offer a much broader range of products than if we had remained at a single price point,” she said.

That, she added, is reflected in the company’s sales results.

Dollar Tree, on the other hand, entered the Canadian market in 2010 and now has more than 200 stores.

“So they have grown, but not quite at breakneck speed for a dollar store business,” said Toronto retail analyst Ed Strapagiel.

While still a relatively smaller competitor Dollarama did sit up and take notice when Dollar Tree entered the country.

But, said Strapagiel, “It'll be a long time before Dollar Tree catches up, if ever.”

Dollar Tree’s Guiler did not provide financial results for his company but said the firm prides itself on providing customers “tremendous value” at $1.25 pricing.

As well, he said, it has created stores that are “bright and well lit…clean, well-organized.”